Research in my laboratory is organized around two lines of work: 1) Development of a primate model to advance deep brain stimulation (DBS) of the central thalamus (CT) as a therapeutic strategy for the treatment of disorders of consciousness resulting from traumatic brain injury (TBI). 2) Understanding how the visual system and motor system are integrated to produce visually-guided behavior. 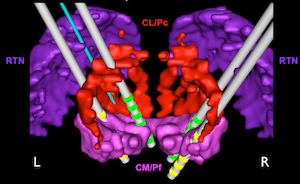 We are currently carrying out a series of DBS experiments with multiple DBS electrodes implanted in the central thalamus. Positioning of the electrodes is guided by building 3D computer models of the thalamus and stimulating electrodes and by the translating the spatial coordinates of these models into surgical coordinates by fusing the models with high resolution MRI and CT images. The subjects in our study are trained to perform tasks that require them to pay close attention to targets on a computer screen that change in either color or position after a delay following a warning. The subjects have to react quickly to the changes to get a reward. EEG, and cellular and local network activity in the anterior forebrain, are recorded while the subjects perform the tasks. DBS is turned on and off during behavioral sessions to determine its effect on task performance and on electrical brain activity. 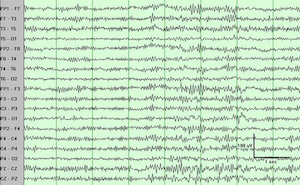 We find that DBS in the central thalamus modifies behavioral performance, EEG and network activity. Specific high frequencies of periodic stimulation, when matched with one particular inter-electrode configuration of current injection, are most effective at improving performance and modulating the timing of neural activity across many regions of the brain. When the subjects perform a trial correctly, when no electrical stimulation is delivered, delta-band activity in the brain is decreased while activity in the beta- and gamma-bands increases in power. When DBS is turned on, this power difference between low-frequency and higher-frequency bands of activity during correct trials is enhanced. Our results suggest that we can modulate natural patterns of activity in the brain and that this control extends to behavioral performance. Our short term goal for this project is to finish characterizing which parameters of DBS stimulation are most effective at modulating behavioral performance and brain activity. 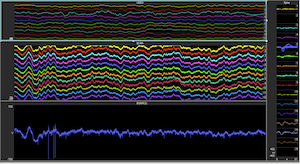 Acute brain injuries afflict over 2 million people a year in the US alone. These injuries can lead to prolonged impairments that can devastate the lives of patients and their families for many years. The emotional and financial strains on families following such an injury are heightened by the fact that many patients often remain in a state where they are unable to communicate or care for themselves.  Other patients may recover substantially but still remain unable to lead independent productive lives because of enduring cognitive deficits. It is now recognized that this wide range of outcomes of impaired consciousness and cognition is linked to a reduction in activity levels across the cerebral cortex and loss of coordinated network activity preventing cognitive resources from being available when needed even if such reserves exist.
Our recent findings have direct implications for the development of optimal methods for central thalamic brain stimulation to modulate cognitive function and bring us closer to the goal of addressing enduring disability in the large patient population recovering from traumatic brain injuries.