The mission of the Iadecola laboratory is to study the mechanisms of normal and abnormal cerebrovascular regulation, and the molecular pathology of ischemic brain injury and neurodegeneration. Major areas of interest include brain dysfunction and damage that underlie two of the most devastating brain diseases: stroke and dementia. In addition, the laboratory studies the interactions between cardiovascular risk factors, stroke, and Alzheimer’s disease. 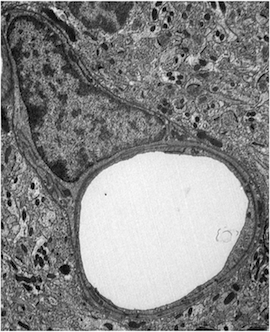 Enlarged pericyte in a capillary of the cerebral cortex in progranulin-null mice, a model of fronto-temporal dementia.

We are interested in elucidating the role of vascular factors in conditions causing cognitive impairment and dementia. The brain is uniquely dependent on a well-regulated delivery of oxygen and glucose through the blood supply. If the delivery of cerebral blood flow is not adequate to match the dynamic energetic requirements imposed by neural activity, brain dysfunction and damage ensues. High blood pressure, or hypertension, is a major cause of dementia. We have discovered that cerebral blood vessels are uniquely susceptible to the deleterious effects of hypertension. Sleep apnea and aging, conditions well known to cause stroke and dementia, also alter brain blood vessels in a similar fashion. We have identified several therapeutic targets that would help protect the brain and its vessels from the damaging effects of hypertension and are further investigating said therapeutic agents. Although the mechanisms of the cognitive dysfunction caused by vascular factors (vascular cognitive impairment and dementia) or neurodegeneration (Alzheimer’s disease, AD) have traditionally been considered distinct, there is increasing evidence that alterations in cerebral blood flow play a role not only in vascular causes of cognitive impairment, but also in AD.   Our work has revealed that AD damages blood vessels in a manner similar to hypertension and stroke. Improving the performance of the blood vessels of the brain also improves the brain alterations produced by AD. 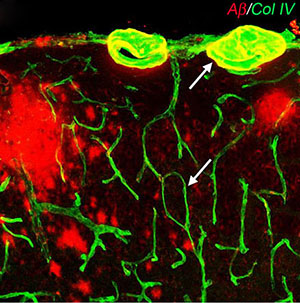 Association between cerebral microvessels and amyloid plaques in the cerebral cortex of mice expressing the Swedish mutation of the amyloid precursor protein.

We have identified a "receptor" in brain vessels that binds chemicals accumulating in AD (amyloid-β peptides) resulting in their damage and are looking to develop ways to block this receptor to protect the brain from the damaging effects of amyloid-β. We have discovered that vascular risk factors, e.g., hypertension, aging, and sleep apnea, and amyloid-beta, a key pathogenic factor in AD, impair the structure and function of cerebral blood vessels and associated cells (neurovascular unit). These deleterious effects are mediated by vascular oxidative stress and inflammation. Injury to the neurovascular unit alters cerebral blood flow regulation, depletes vascular reserves, disrupts the blood-brain barrier and reduces the brain’s repair potential, effects that amplify the brain dysfunction and damage exerted by incident ischemia and coexisting neurodegeneration. Clinical-pathological studies support the notion that vascular lesions aggravate the deleterious effects of AD pathology by reducing the threshold for cognitive impairment and accelerating the pace of the dementia. In addition, disturbances of cerebral perfusion and/or energy metabolism have also been observed early in the course of AD or even in non-demented subjects at genetic risk for AD. These observations, collectively, indicate that vascular alterations are important both in vascular and neurodegenerative dementias. 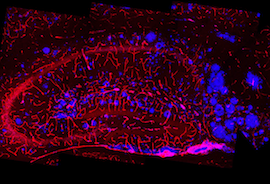 Amyloid plaques (blue) associated with blood vessels in the hippocampal formation of mice overexpressing the Swedish mutation of the amyloid precursor protein.

Ongoing studies suggest that  a major component of the vascular damage induced by amyloid-beta is caused by free radicals that alter the ability of cerebral blood vessels to regulate blood flow to the brain. Thus, amyloid-beta suppresses the ability of endothelial cells and neurons to regulate vascular tone. The resulting alterations in the dynamic regulation of cerebral blood flow impair the delivery of vital substrates and oxygen to the brain, which, in the long run, increase the susceptibility of the brain to ischemic damage and neurodegeneration. In the absence of mechanism-based approaches to counteract dementia, targeting vascular risk factors and improving cerebrovascular function offers the opportunity to mitigate the impact of one of the most disabling human afflictions.

Why does the brain die after stroke? Our laboratory is also investigating the cellular and molecular alterations in the brain caused by blockage of the blood supply. We have found that stroke activates certain cells of the immune system and produces brain inflammation. Blocking the action of these cells improves the brain damage caused by the stroke. We are now looking at what triggers inflammation and finding ways to stop it to salvage the brain. On the other hand, we also discovered that a certain type of immune cells protect the brain after stroke. This is a new and exciting area of investigation that may lead to developing new cell therapies for stroke. 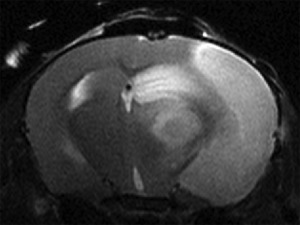 MRI of brain damage induced by middle cerebral artery occlusion in the mouse.

Alzheimer's disease (AD) and stroke. Once considered mutually exclusive, these two prevalent brain diseases are now known to have much in common. Our work has revealed that AD damages blood vessels in a manner similar to hypertension and stroke. Improving the performance of the blood vessels of the brain also improves the brain alterations produced by AD. We have identified a "receptor" in brain vessels that binds chemicals accumulating in AD (amyloid-β peptides) resulting in their damage and are looking to develop ways to block this receptor to protect the brain from the damaging effects of amyloid-β.

Bright and dark sides of brain plasticity. The remarkable ability to learn and adapt to a changing environment, known as neuroplasticity, is a defining characteristic of the brain. Neuroplasticity is mediated by subtle changes in the connections through which neurons communicate with each other and can protect the brain from the damage associated with stroke and dementia. However, neuroplasticity has a dark side. We discovered that the synaptic changes underlying learning and memory are similar to those induced by hypertension, addiction, and sleep apnea. We are developing ways to harness the "good" side of neuroplasticity to protect the brain from the damaging effects of stroke and dementia.

The long-term goal of our laboratory is to shed light on the causes of stroke and dementia, and to develop new therapies for these devastating conditions.

10.    Ishii M., and Iadecola, C.: Metabolic and Non-Cognitive Manifestations of Alzheimer's Disease: The Hypothalamus as Both Culprit and Target of Pathology. Cell Metabolism, 22:761-776, 2015